We’ve summarised research and practice information from New Zealand and overseas, to increase understanding of loneliness and support evidence-based action.

The current pandemic is creating new barriers to connection throughout the world, as well as opportunities to learn new skills, and to connect in different ways. Here is some emerging research and expert commentary relating to social isolation and loneliness under Covid-19 restrictions:

The ‘Have Our Say’  research study  currently being conducted by the the Te Arai research group gives New Zealanders over 70 the opportunity to record their experiences during Covid-19 for posterity. Learn more about this study, and.

An overview piece on the dangers of social isolation during a pandemic from the European Public Health Alliance.

A research journal article on a recent  3-year US study showing that our need to connect is as fundamental as our need to eat. The article relates the findings to Covid-19 isolation. The preliminary report on the study is here.

A US article with commentary from some of the leading US experts on loneliness and social isolation, and recommendations on how to stay connected, discussing for instance the value of different forms of virtual communication during lockdown.

What can we do about loneliness in communities?

In 2018 Age Concern New Zealand held a hui with key stakeholder organisations and commissioned a Horizon poll of 1,000 adult New Zealander’s to explore barriers to social connection and identify solutions to loneliness.

The findings from the Horizon poll report, and feedback from the hui (see below) inspired the formation of our coalition to end loneliness, and the development of this website. 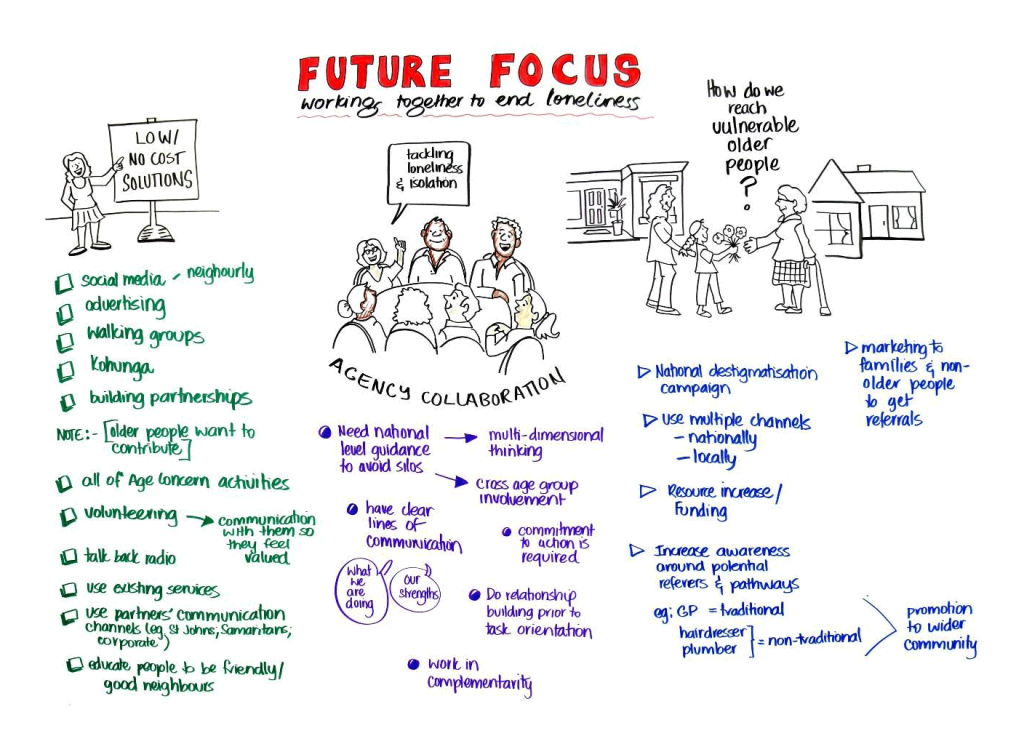 Key learning was that a community development approach with staff support was highly effective, and that a relatively small investment could bring about significant citizen action.

The UK Campaign to End Loneliness report “Promising Approaches to reducing loneliness and isolation” provides a useful framework to understand and categorize different types of loneliness intervention, with case studies to illustrate each type.

In this paper, lead researcher Julian Holt-Lunstad discusses challenges around reducing the health risks of social isolation, and outlines an agenda for integrating social relationships into current public health priorities.

Prevalence and Risk Factors for Loneliness

As detailed in The Social Report 2016, factors associated with higher levels of loneliness from the 2014 NZ General Social Survey were:

*A 2018  submission to the Mental Health Foundation to the government inquiry in mental health and addiction provides evidence of elevated risk of distress, suicide and addiction for the rainbow population, caused by discrimination, prejudice, stigma and social exclusion. Download the inquiry report here.

A 2017 New Zealand study of 72,000 older people who had received an InterRAI home-care assessment found that 21% of the sample (aged 82.7 years on average) were lonely, and 29% of those living alone.

“Getting Carers Connected”, a report released for UK Carers Week 2019, provides evidence of high levels of loneliness amongst carers, particularly for those lacking financial and practical support.

A large-scale survey of adults over 45 conducted by the AARP (American Association of Retired Persons) found that one-third of respondents were lonely.

Higher rates of loneliness associated with low income, smaller social networks, physical isolation, LGBTQ status, being an unpaid carer, being never married, divorced, separated, or being unsatisfied with a partner, and not knowing one’s neighbours.

The full report is available here.

The effects of social isolation and loneliness on health, are now increasingly understood.

A 2015 US metanalytic review found that social isolation, loneliness, and living alone increased risk of early mortality by 29%, 26%, and 32% respectively, indicating that both subjective and objective social isolation pose as serious a risk to health as well-established risk factors such as smoking and obesity.

A 2018 US study, discussed here found that loneliness increases the risk of dementia by 40%.

The cost of loneliness and social isolation

A University of Otago study published in 2019, and discussed here found that the following factors increase the likelihood of going into rest home care:

A 2017 US study found that the federal health care program spends an average of $1,608 more a year for each older person who has limited social connections than for those who are more socially active, amounting to $6.7 billion per year.

In October 2018, the UK “What Works for Wellbeing” centre published a review of available evidence about what works to tackle loneliness. Findings were that there is a lack of quality evidence, particularly for the under 55 age group, and that evidence relating to older adults consists generally of small-scale studies, lacking consistent definitions and measures, and not capturing the differences in effect for diverse populations. Download the full report and slideshow presentation from here.

Age Concern New Zealand partnered with a research team from Auckland University on a Tranch1, National Science Challenge: Ageing Well study. The study explored how loneliness and social isolation are experienced by older New Zealanders from different cultures, and evaluated the effects of a befriending service, through recruitment of participants from Age Concern’s Accredited Visiting Service. Results are summarised in this presentation given at Age Concern New Zealand’s 2019 “Age Concerns Us” conference.

A UK review of evidence of intergenerational interventions published by Age UK found that positive intergenerational interactions in the workplace, in health and social care settings, in family settings, and particularly through friendships have a range of benefits including: reducing ageist attitudes and behaviours, increased helpful behaviours (volunteering, donating), increased interest in ageing and aged care, lower workplace turnover and reduced anxiety about ageing amongst younger people.